For Category 1 filers, a U.S. shareholder is defined as:

As you can see it defines U.S. shareholders as generally having over 10% ownership in voting power before 2017, or either 10% voting power or value in 2018 onwards. It also goes on to layout 4 different types of entities which can be defined as a U.S. person, as:

If you meet the requirements of the 10% threshold of share ownership and also belong to one of the four categories of U.S. persons, then you should check if the foreign corporation was categorized as a Specified Foreign Corporation (SFC) anytime during the year. A SFC in terms of category 1 is defined as:

2. Any foreign corporation with one or more domestic corporations being a U.S. shareholder. However, if a passive foreign investment company (as defined in section 1297) with respect to the shareholder is not a CFC, then such corporation is not an SFC.

See section 965 and the regulations thereunder for exceptions.

There are some relief options (reduced form 5471 filings) for certain category 1 and 5 filers, which is outlined in Rev. Proc. 2019-40. These special categories mainly have to do with being an unrelated U.S. shareholder of the foreign corporation or having related but constructive ownership. They are thus deemed as “Unrelated section 958(a) U.S. shareholder” and “Related constructive U.S. shareholder”.

Here are the two conditions for each type of special categories per the table below:

It’s important to note that many of these categories follow definitions to sections of tax law, so its also suggested to seek advice from a tax professional for further information about your particular situation.

Having said that, if you do fall under these two categories, you would have a greatly reduced form 5471 filing requirements as compared to category 1, as you would not be required to file separate schedule J (Accumulated Earnings & Profits of CFC) and separate schedule P (Previously taxed earnings and profits of U.S. shareholders of certain FCs).

The filing requirements for category 1 filers for these three possible scenarios are:

After reviewing the definitions of Category 1 filers, you may be able to determine if you fall under this category and what possible form 5471 filing requirements you may have. Also be sure to check out the exceptions from Filing Form 5471 to see if you fit any of these requirements to avoid this tax filing. Of course it’s better to double confirm any results you have with a tax professional before making any final decisions on this tax filing. If you need more information about form 5471, contact us.

And if you need help managing your foreign company’s shares, checkout this online share management software at Eqvista. 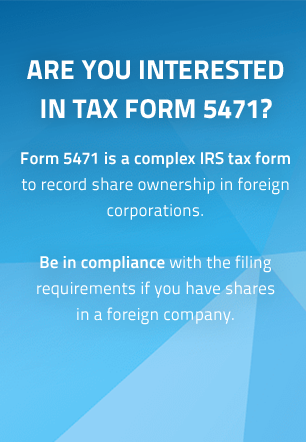 Category 5 Filer What is a Dormant Foreign Corporation? Exceptions from Filing Form 5471